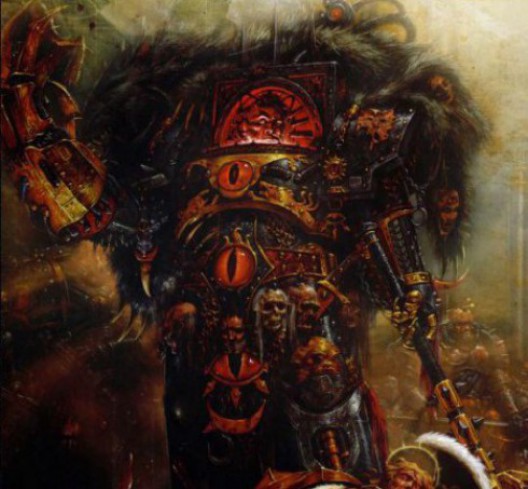 Origins of the Heresy:

The first mentions of the Heresy was simply to fill a gap on a page, in one of the expansion books to Rogue Trader in 1987. Oddly enough the first HH weekender is on the 25th anniversary year of the existence of the Horus Heresy.  Adeptus Titanicus was set in the heresy era simply due to GW not being able to afford to create different titans, so they decided on a ‘civil war’ setting.

Book 2 in Forge World’s range of Horus Heresy rulebooks is focused on the first part of the drop site massacre on Isstvan 5. (initial lands, loyalist attack of traitor forces, loyalist retreat back to newly landing zones, loyalists get hammered).  The armies in Massacre are:

The Night Lords are getting a ‘Raptor’ jump assault unit and a ‘terror’ focused unit.

The Salamanders receive Firedrake terminators (only unit in Horus Heresy to have storm shields) and a flamer focused infantry unit.  A playtester told Alan Bligh that the Terminator Unit was the «unit most made of win ever»

The Iron Hands receiving a bionic heavy Breecher squad, and the Gorgon Terminators, which include the Morlocks (Ferrus Manus’s bodyguard)

Word Bearers are receiving the ‘Circle of Ashes’; which are a flame focused destroyer unit, their purpose is to locate and destroy planet’s holy places.  And the

These legions all receive an additional ‘Legion Exclusive’ unit.  The only one of these we know are the Emperor’s Children, which are getting ‘proto’ sonic marines. The others were not mentioned.

Book three covers the second part of the Isstvan 5 campaign and the Battle of Phall. The book contains:

These legions will receive their Primarch, 2-3 special characters, 2 ‘legion exclusive’ units and additional wargear and rites of war exclusive to their legion.

Mechanicum unknown whether they are in the book, but it is almost a certain that Mechanicum will feature in all books; they will also receive new units. But what these are is unknown.

Books four, five, and six will cover the events at Prospero, Calth and Signus Prime. although the order for these is not set in stone.  Prospero will almost certainly come first. These books will also see the introduction of ‘non-astartes’ forces.  (e.g. Imperial/traitor guard).

Prospero will see the Legio Custodes and the Sisters of Silence

Calth will have Imperial Guard  Alan Bligh stated that their would be several different Imperial Army lists covered throughout the books, due to the wide variety.   I assume this will work as in 40k (tank company, siege regiment, airborne, etc.)

Signus will have Daemons.  This will simply be an expansion to the present Deamons codex, with some new units and characters in addition to alterations to existing units (e.g. unit size)  Simon Egan already has some ideas for the Sanguinius model. and he’s looking forward to doing him, (as he loves sculpting feathers).

Daemons and Imperial Army will not receive full new model ranges, and will rely on the GW and existing FW ranges for basics. only new units will get new models.

Dark Angels and White Scars will be waiting until book 7 if not longer.

Forge World is planning to release Ferrus Manus next, aiming at advanced sales at games day. The model of Ferrus Manus is sitting in Simon Egan’s fridge at home.

An Erebus/Kor Phaeron double kit will come out shortly after. Then it will be Horus, with Mortarion after him. 3 people are now working on the HH ‘Characters Series’.  So releases of primarchs and special characters should start to speed up.  Simon Egan has been the only one working on them up ’til now.

Legions may receive their shoulderpads/vehicle doors/transfers and brass etch sheets before there books are released or even worked on.  This is to allow players to start collecting their legions early and then simply adding their special units and characters when their books arrives.

Legions will continue to receive additional new units and characters with later appearances. so that players whose legion is done early is not left out later no. However all Legions will receive the same amount of attention in total.

I hope this all helps!